Weavers and their World

The magical mix of words, songs and tunes presented by Philip Freeman, Claire Weston and Pete Damsell, was inspired by a visit to the Newtown Textile Museum. The highly enjoyable performance in the Main Hall on the 20th September was a different take on the Local History Group’s aim of bringing local history to life, and it is difficult to reflect the life and atmosphere of the evening in just a few summarising words.

‘Weavers and their World’ was a look at the Industrial Revolution in 19th Century Britain, and how it affected the daily lives of working people, with particular reference to weavers. Music, song and dancing, using whatever instruments they had to hand, was a way of alleviating the hard daily grind and poverty of industrial working life. The opening tune was a morris tune from Gloucestershire:

The weaving industry was much changed by the invention of the Spinning Jenny, which transformed the production of yarn, which became available in such quantities that hand loom weaving had to be mechanised too. The next song referred to the number of mechanised looms that could be handled by one weaver:

Newtown Textile Museum is a perfect example of the small scale industrialisation typical of our mid Wales towns, with living quarters on the lower floors of terraced housing, while the upper floors were knocked through to neighbouring houses in order to accommodate the long looms. In contrast, shepherds benefitted from a healthier life on the hills with their flocks:

WE SHEPHERDS ARE THE BEST OF MEN two voices

Throughout the 19th Century, ordinary working men struggled to improve their lot, while employers and the Government did their utmost to thwart their efforts: DURHAM/LIVERPOOL HORNPIPES guitar, fiddle, whistle

The Combination Acts, the Corn Laws and the introduction of Income Tax to help pay for the war effort, all contributed to the miserable lives that working folk endured. From happier times came two more morris tunes:

The hardship of life began at a very early age. The next tune was the story of Robert Blincoe, on whom Dickens’ Oliver Twist is thought to be based:

The French Wars had brought some prosperity in creating demand for cloth, but with its end there was a severe slump in trade. To add the difficulties all the soldiers who came home from the wars flooded the labour market, looking for work. The next song was called the Hard Times of Old England and is a satire on an older patriotic song called the Roast Beef of Old England, and the second gave the audience a chance to join in:

Local people who acted to improve the lot of the working people through the early middle of the century included Newtown’s Robert Owen, who owned a cotton mill in New Lanark, David Davies of Llandinam, and the Chartists who in 1839 rioted in Llanidloes to resist arrest. The first half closed with

The second half of the concert opened with ‘Leek Soup’, a reference to the poverty and hunger experienced by the workers. In mid and south Wales, Rebecca and her ‘daughters’ were in action against these conditions, and the imposition of road tolls which made every journey expensive.

Despite all this discontent, there was still time for music and dancing at holiday time:

The next song was from Northern Ireland, and became known as the anthem of the Belfast linen trade:

The 1840s saw hunger everywhere, especially in Ireland where the potato famine saw the deaths of a million people, and the emigration to America of half a million more.

In the 1860s the temperance movement made their efforts to improve people’s lives, including in Llandinam, where The Lion was a temperance hotel until 1958. The pace of industrialisation brought us the world depicted by Charles Dickens, and the conditions prompted Marx and Engels to write the Communist Manifesto. The next songs captured the spirit of those times:

The mid century development of the railways, the growth of the Trade Union movement, the establishment of the Labour Party in 1900, and the growth of international trade all affected people’s lives in various ways. The tensions between industrialised weaving and artisan weavers had simmered for nearly a century, but the Arts and Crafts movement celebrated the prized skills of hand weaving and other traditional crafts. These can still be seen reflected in the Llandinam Village Hall today. The event ended with two more tunes, including another morris tune from Gloucestershire, which is where we started out: 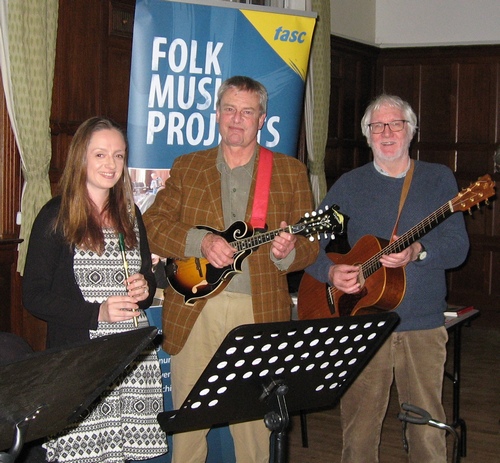