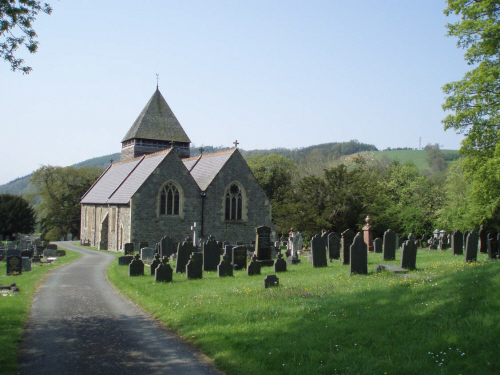 St Llonio’s church is believed to date back to 520AD. Originally a clas structure, its western tower topped by a pyramidal slate roof over a timber belfry is believed to date from the 13th century. Much of the body of the church was rebuilt at the time of the 19th century restoration, though the north wall of the chancel is original. The church contains a 17thC wooden reredos, two old tomb recesses in the sanctuary, a damaged Perpendicular font and some 17thC carved choir stalls. The triangular form of the churchyard is dictated by the elongated shape of the spur.

The square western tower with its timber belfry is in typical Marches style and is considered to be 13thC, though the top stage has been rebuilt and new fenestration inserted. The main body of the church was rebuilt in 1864-5, leaving only the north wall of the chancel. New windows in square-headed frames were inserted throughout the church at the time of the restoration.