The History of Newtown and other Mid Wales towns

David Hall, Chair of the Powysland Club, gave a fascinating description of the development of Mid Wales towns from pre-Roman times to the present day to a knowledgeable and attentive audience in the Girls’ Parlour in the Village Hall on the 19th November. Beginning with an overview of the different patterns of development in the small towns of Mid Wales, David showed how Radnorshire villages, with New Radnor and Painscastle as examples, showed a distinctly English pattern of development often within boundary walls which may have been fortified. Within these boundaries were found a cluster of farms and a church, but few other signs of habitation. In Montgomeryshire farms were scattered widely, and settlements were more often seen to be groups of dwellings and other buildings, with a planned approach to the layout. Towns often featured a market place, and Charter Market status was was considered a valuable asset which continues to play its part in our towns today. Using Census returns and early trade directories, David was able to show how the population numbers grew and decreased over the centuries, reflecting the levels of economic activity and the impact of the industrial revolution on the area. Using Newtown as the main example, he explained the changes to the local economy as industry replaced agriculture, and as the heavy industry subsequently declined, to be superseded by smaller businesses, large employers such as Pryce-Jones, and the development of the services of a county town. His final snap-shot of twentieth century Newtown was of the early 1960s, before it was designated a ‘new town’, and the town we know today began to take shape. 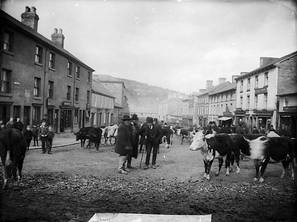