The fascinating story of the railway line from Moat Lane Junction to Brecon told by Brian Poole filled the Girls’ Parlour in the Village Hall on the 17th May 2018. Brian illustrated his talk with some of his extraordinary photographs which brought to life the human aspect of the tale.

The Rev. Samuel Roberts of Llanbrynmair wrote in 1854 that Montgomeryshire could boast the loveliest homes for Peers of the Realm, had sea-lords, game lords and coach lords, but no railways. Promoters, politicians and people argued for years before any part of a railway was built. Railway companies needed individual Acts of Parliament before they could become lawful bodies with powers to buy land, build, and run their lines. When their Bills were presented to Parliament by a local supporting Member they could be opposed by other Members on grounds of what was good for the countryside. In fact, the opposition was usually inspired by rival companies wishing to build an alternative, or wishing to prevent the formation of the proposed company, because it might reduce their profits by draining off some of their traffic to perhaps a better route.

The Llanidloes & Newtown Railway obtained their enabling Act in 1853, and in 1855 David Davies of Llandinam was awarded the contract to construct the line from Llanidloes to Newtown. He used only men and horses and carted all imported materials from the canal terminal at Newtown. The Moat Lane to Llanidloes section was opened for goods traffic on 30 April 1859 and for passengers from 2 September 1859.

The first passenger timetable showed four trains between Newtown and Llanidloes, but this was reduced to three when the service was extended to Brecon. By 1889 there were three trains north of Builth Road and five south thereof. By 1903 there were five on all parts of the route with three more north of Llanidloes. Most of the trains terminated at Moat Lane Junction or Brecon. There were also some running on only one or two days per week on parts of the route.

The route of the railway line from Brecon to Newtown climbs steeply from Brecon out of the Usk Valley to Talylln Junction. From here it descends close to the Afon Llyni to Three Cocks Junction. This river enters the Wye nearby, the railway line follows the Upper Wye valley to a point two miles north of Rhayader. A stiff climb begins here to cross the watershed into the catchment area of the Afon Dulas, this flowing into the River Severn at Llanidloes. A gentle descent follows along the Severn Valley into Newtown. To construct a railway line along this route involved cuttings, embankments abutments, bridges and tunnels at Marteg, Rhayader andTalyllyn. The river levels could rise quickly after heavy rainfall, flowing rapidly, generating a force that could destroy bridges and the railway track.

Sixty men were employed at the Bridge Depot in Caersws to build and maintain the various types of bridges. The Bridge Depot used 2 hand operated cranes to construct bridges, such as the swing bridge at Barmouth, which was originally a slide bridge, and allowed for sail traffic. At Morfodion farm near Llanidloes a wooden trestle bridge was built over the Severn. This is still used for farm traffic, and is listed.

Another 60 Staff were employed at Moat lane to run the station, engine sheds, shunting yard and a refreshment room for both passengers and staff. The jobs ranged from carriage cleaners, porters, stationmaster, train drivers, signalmen to clerical staff who collected money, paid weekly wages, monthly salaries, railway pensions and numerous administrative tasks. There are still descendants of these employees in the local area. Due to their experience working on railways in mid Wales former MWR rail men were able to secure prestigious jobs worldwide.

Goods moved through Moat Lane including coal, animal feed, bricks, timber and road stone. The siding at Penstrowed for loading the latter is still visible.

Moat Lane refreshment room remains part of the folklore of the area. The chapel membership was very kind and generous but they were strong teetotalers, including David Davies. The temperance movement was very strong. The licensing Act of 1904 brought legal complications. Application to sell intoxicants on railway premises was granted on the understanding that it would only be sold to passengers and close after the departure of the last train. The stationmaster was told to be watchful. The resourceful people of the temperance villages would buy a return ticket from Llandinam, Caersws or Pontdolgoch to Moat Lane to enjoy a pint of beer.

The line from Moat Lane Junction to Brecon was in service for just over 100 years starting in 1859 and closed to passengers from 1963. Freight trains continued to run to Llanidloes until 2nd October 1967. This was mainly to serve work on the Clywedog Dam and hydro-electric station. Dolwen station closed but Llandinam and Llanidloes stations remained open for full loads. The line’s closure was finally down to it no longer being financially viable. 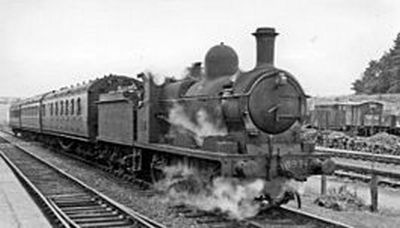